The interdisciplinary arts festival was designed to celebrate, promote and build community around black artistry. The week of free events — several of which were held at Central Library, and others on the UW-Madison and Edgewood College campuses — included film, live theater, a poetry slam, and a panel discussion about black art and artists in Madison.

“It was amazing to see the number of slam poets who visited Madison for the first time just for this festival, as well as the number of Madison community members who came out to show their support,” she said. “They were grateful to have a place like the library to gather, perform and build community amongst slam poets from all over the U.S.” 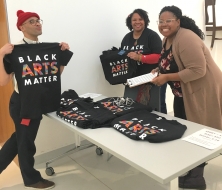 Black Arts Matter T-shirts were sold at the library during the week’s events.

Madison Public Library’s Central Library hosted the Black Arts Matter Poetry Slam on the evenings of March 8-9. Finalists (pictured here) from Friday earned the chance to compete for $1,000 in prizes on Saturday. 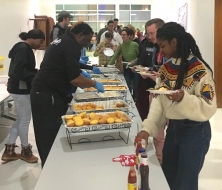 Those who attended Black Arts Matter events at Central Library enjoyed a buffet.