One of the 2018 Library Takeover teams hosted the Love, InshAllah event on September 21 at Central Library. The event gave attendees a glimpse of the diversity of Muslim women’s love lives in America and the nuances of being Muslim. The night of storytelling at Central Library featured young Muslim-American couples who shared their love stories. Guest Nura Maznavi, author and editor of Love, InshAllah: The Secret Love Lives of American Muslims, spoke and signed books at the event. Team members included Maria Ahmad, Syed Umar Warsi, Mouna Algahaithi and Sedgewick Smith, Jr.
Later that weekend, a second Library Takeover event — the Nourish You: Self-Care Retreat on September 23 — centered around women who don’t always feel included in mainstream self-care offerings. The event was planned by the team of Araceli Esparza, Nikki Cook, Jasmine Timmons and Venus Washington. The goal was to inspire women to relax, and to provide tools that can be incorporated into their lifestyle to enhance or begin a self-care practice at home.
Library Takeover provides space, time and resources for community members to host their own events, setting the stage for future library programming reflective of all Madisonians.
The programs were funded by a gift from the Gerald M. Kline Family Foundation. Learn more about the Library Takeover programs at madisonpubliclibrary.org/library-takeover. 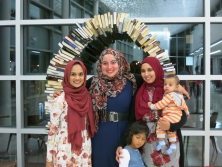 Love, InshAllah was one of two Library Takeover events in fall 2018.