Hughes, Rajaraman Reflect on Six Years as Board Members 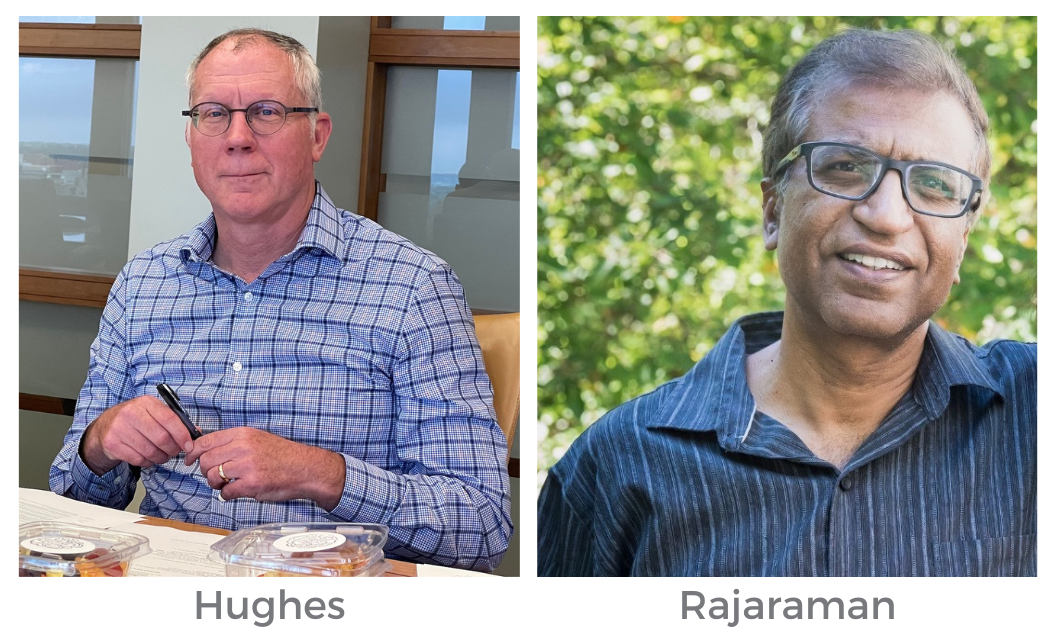 Christopher Hughes, Partner at Stafford Rosenbaum, served on the board for six years. Stafford Rosenbaum became involved with the foundation during the Central Library capital campaign. Soon after, Hughes joined the foundation board, in large part because of his respect for former foundation Executive Director Jenni Jeffress and Wisconsin Book Festival Director Conor Moran. Hughes got to know Jeffress during the capital campaign and knew Moran from his days as a legal intern at Gathering Waters Conservancy, when Hughes served on the Conservancy’s board.

“The real hook for me is the Wisconsin Book Festival,” Hughes said. “It’s been a great event for the entire state, not just Madison. It’s been fun to see the Book Fest grow and prosper … the pandemic has almost made it stronger, with the platform to reach people both in person and virtually, locally and across the nation.”

While on the board, Hughes served on two committees: Development; and Diversity, Equity and Inclusion. He plans to continue serving on foundation committees and intends to maintain Stafford Rosenbaum’s deep commitment to the foundation. “I think the reason the foundation is really strong is because there’s a phenomenal staff,” he said. “The board members are great, too; they’re all committed. They all have points of view on different issues and look at things many different ways. Everyone enjoys working together toward the mission.”

Hughes lives in Middleton with his wife, Mary. They have two adult sons, Sam and Noah. When asked what he likes most about the library, he said, “It’s nice to go and just kind of browse and not necessarily go there with any particular idea of what you want to check out.”

Rajesh Rajaraman also served on the board for six years. He had been on the United Way board and was working for Christensen & Associates under Lau Christensen, a loyal foundation supporter, when he got involved with the foundation. He and his wife, Deepika, quickly became Central Library capital campaign donors and got acquainted with Jeffress through Christensen.

“Jenni is a very strong leader and phenomenal fundraiser — just one of the top people in running an organization,” he said. “I’ve really enjoyed my time with the board. This is a very high-functioning board, and every meeting is well organized. My colleagues are high-quality people and passionate about serving the community.”

Rajaraman, who served on the Finance Committee along with other ad hoc committees, said he put his energy mostly into the simple concept of good stewardship of the community’s investments in the foundation. “They trust us with their money, and I wanted to make sure we were able to guard those assets and utilize them effectively,” he said.

A huge believer in libraries, Rajaraman said he thinks they are a great value for the operating budget that Madison sets. ”I’m a big fan of books and having information available to people,” he said. “Libraries are very democratic because they’re accessible to everybody. The resources that they can offer are amazing. They keep you out of trouble. They’re good for community-building. They’re good solutions for people to come together. The library is not just a repository of information … the value it provides to the community is immense.”

Rajaraman, who has an economics and engineering background and a Ph.D in electrical engineering, runs an investment fund and small startup in the batteries and renewable energy industry. He and Deepika have two adult sons, Amol and Amit.