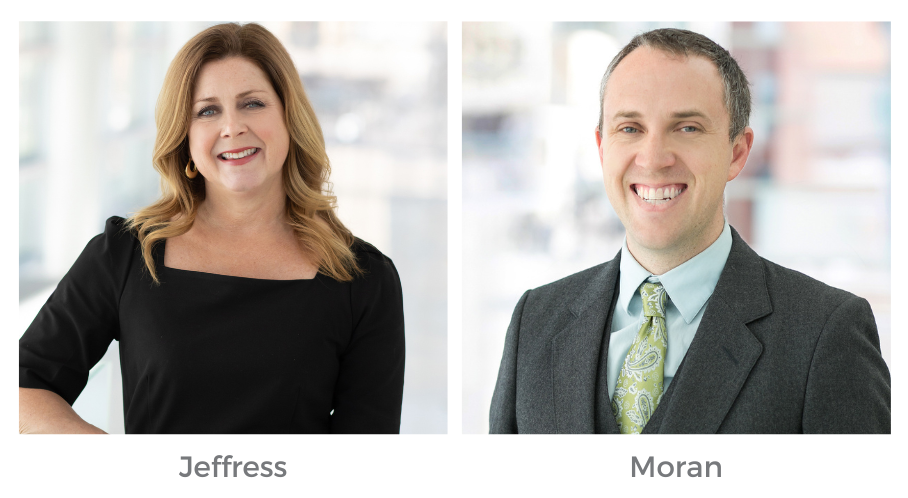 Jeffress joined the foundation in 2010 at the beginning of its highly successful capital campaign for a new Central Library. Additionally, she led capital campaigns for Meadowridge and Pinney libraries. Under her guidance, the foundation nearly quadrupled its endowment, from $2.27 million to $8.74 million. She also started two annual fundraisers, Lunch for Libraries and Ex Libris, both of which have a recurring, dedicated corps of guests; and she worked with Madison Public Library to bring the Wisconsin Book Festival — previously run by the Wisconsin Humanities Council — under joint foundation-library operation.

Moran grew up in Oconomowoc, Wis. He earned his Bachelor of Arts degree from the University of Iowa, where he majored in English and French, and his law degree from UW-Madison. Prior to directing the Book Festival, he organized author events at Politics & Prose in Washington, D.C., gained Development experience at REAP Food Group and Gathering Waters, and served on several National Endowment for the Arts committees.

Moran was chosen for his background with leading and nurturing the Wisconsin Book Festival for nearly 10 years, combined with his passion for learning, books and connecting people with libraries, said foundation board President Heather Clefisch. Under Moran’s leadership, the Wisconsin Book Festival transitioned from an annual fall weekend into a year-round event series, with a substantial increase in attendance. Additionally, he significantly expanded representation of diverse authors and books.

“We were impressed with the many ways Conor’s success in leading the Wisconsin Book Festival could translate to leading Madison Public Library Foundation,” Clefisch said. “His deep knowledge of the library, the community, and his ability to connect foundation supporters with evolving and diverse community needs — especially focused around the new Reindahl Park Imagination Center library project — became very apparent.”

The foundation conducted an extensive eight-week Executive Director search this fall in partnership with a recruiting consultant. Several rounds of interviews with the Search Committee reduced the 52-candidate pool to two finalists, who were invited to meet the board, staff and library leaders. The board voted unanimously to offer Moran the position.

“Throughout my career, building and nurturing relationships has been at the heart of it all,” Moran said. “I’m thrilled to further these skills by leading a highly respected Madison nonprofit organization that ensures equal access to the robust Madison Public Library system and its treasured resources.”