Madison Public Library and its partners at Madison Metropolitan School District have selected seven schools to benefit from the Bubbler’s maker-based education as part of the Making Spaces program, with funding from a $200,000 Schmidt Futures grant.

In 2016, the Bubbler at Madison Public Library launched a project funded by Google, Maker Ed and the Children’s Museum of Pittsburgh aimed at developing a national strategy to integrate maker programming into schools. Partnering with MMSD, the library picked six schools for the first phase: Franklin, Sandburg and Huegel elementary schools; Toki and Whitehorse middle schools; and Capital High School. Each school launched its own fundraising campaign for their local making projects. Grant funds from Schmidt Futures will expand the program over the next two years.

The participating schools will be Falk, Glendale, Hawthorne, Lake View, Muir and Schenk elementary schools; and O’Keeffe Middle School. The program will expand to an additional five schools in 2019–20.

The schools were chosen with the library’s strategic lens in mind. Applications were judged on:

“This partnership and the skills that our students will acquire speak directly to our district’s vision for all students — that they will not only graduate, but graduate with the skills and abilities to be successful in college, career, and community,” said TJ McCray, Director of Instructional Technology & Media Services for Madison Metropolitan School District. 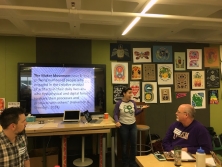