Tell us a little about yourself. I grew up in Marion, Wis. I attended UW-Madison, where I studied environmental studies and music, and graduated with a Bachelor of Music in tuba performance. I met my (future) wife, Diane Drexler, right before graduation. I earned my Master of Music and Artist Diploma from Yale University School of Music and worked as a Library Assistant at Yale’s Cross-Campus Library. I then earned a D.M.A. in Tuba Performance, with a minor in Wind Instrumental Conducting from the University of North Texas. I was a Library Assistant at UNT’s Music Library. I taught music at Southeastern Oklahoma State University and Northwestern State University of Louisiana. I was a busy freelance musician in the Dallas-Fort Worth metroplex during that time as well.
We returned to Wisconsin in 2003. I was a visiting assistant professor of music at the University of Iowa for a year before joining Madison Public Library. In addition to working at Pinney Library, I teach music part time at Carroll University and am a freelance musician. I also work as a Chief Election Inspector for City of Madison elections.
Before working at the library, what are some of the most interesting jobs you’ve had? As a Project Assistant for Yale’s Oral History American Music project, I transcribed recorded interviews with Duke Ellington, Frank Zappa and Leonard Bernstein. As a Recording Assistant at Yale’s Fred Plaut Recording Studio, I recorded the Yale Glee Club, Ahmad Jamal and the Tokyo String Quartet, among others.
How long have you worked at the library, and what is your role? I was hired as a page in 2004 and transferred to Pinney Library in 2005. I enjoy my role in keeping our collection circulating, mended, organized and shelved, as well as helping patrons with their questions and account issues. I’ve administered 45 elections so far through in-person absentee voting at libraries. I look forward to what new Pinney holds for the future of our community!
What kinds of hobbies and interests do you have outside of work? I dabble in studying foreign languages. I have a moderate ability in Spanish, with limited abilities in German, French, Finnish and ASL. Diane and I share an interest in art glass. We’ve visited four glass museums so far.
What do you like to read? I tend to read nonfiction and reference. I love looking at maps and atlases, but also read biographies and micro-histories like those of Mark Kurlansky. (I highly recommend his The Basque History of the World and 1968: The Year That Rocked
the World.)
What are two items on your bucket list? 1. To become truly fluent in one or more additional languages in order to travel, work or provide community service. 2. More glass museums! 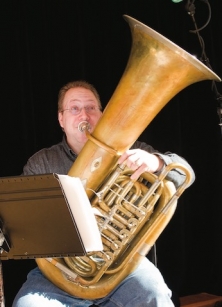