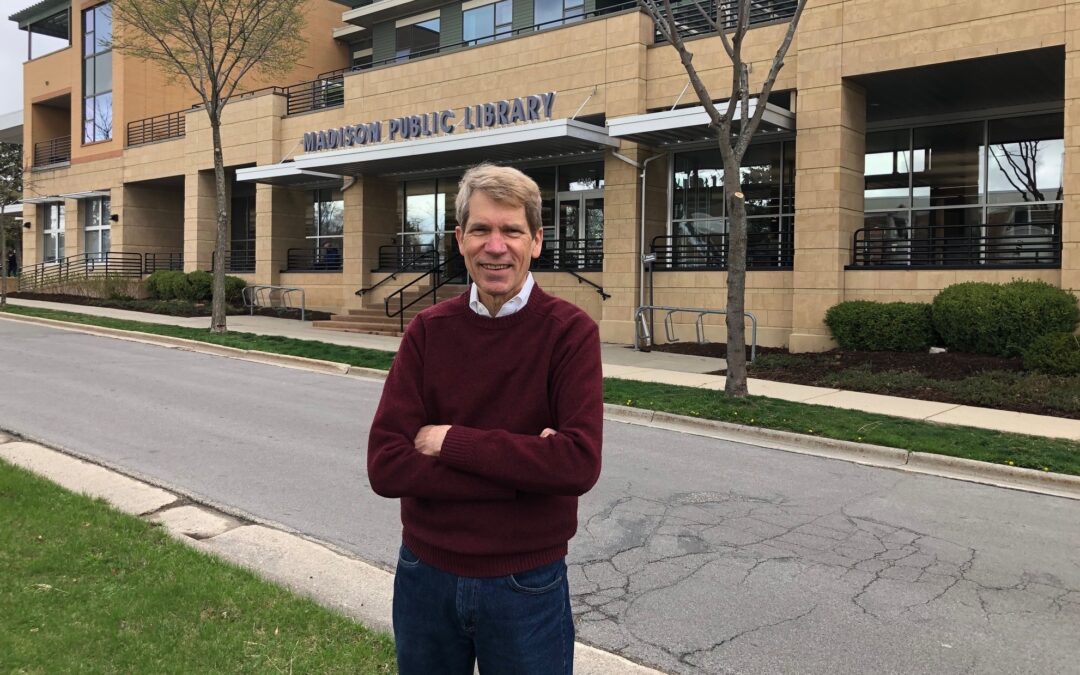 Rick Chandler has been an instrumental volunteer and donor to Madison Public Library Foundation over the last 15 years. He is a former board of directors member, a Silas Pinney Legacy Society member and a current member of the Donor Development Committee. He was also responsible for hiring foundation Executive Director Jenni Jeffress. We’re so happy Rick agreed to be featured in our Donor Profile this month!

Describe your involvement with Madison Public Library Foundation.  I volunteered to work on the Sequoya Library fundraising campaign in 2006 and then served on the foundation board from 2007 through 2016, including two years as President.  It’s been very gratifying to see the foundation grow and increase its scope of activity over the years, and in particular to see how the foundation’s efforts have helped build outstanding facilities such as the Sequoya, Goodman South, Central and Pinney libraries, and have helped fund a variety of programs.

The Central Library fundraising campaign was a big step forward for the foundation.  It had lots of twists and turns, but the final result was worth it.  A library consulting firm we met with pointed out that a major fundraising campaign was an opportunity to increase our visibility and get more people involved, and also described how foundations in other cities had established popular library-oriented events that appealed to a wide range of people.  We’ve been able to follow their advice and attract many more supporters through our campaigns and events.

I’ve enjoyed working with many volunteers, staff and board members.  I’d like to mention three people who have made uniquely important contributions.  Judy Olson, who recently passed away, helped start the foundation in 1993 and was the driving force in building it for many years.  Tripp Widder has contributed in many ways and was especially instrumental in the Central Library project.  Jenni Jeffress has served as Executive Director for the past decade and has done a great job of making the foundation an active, vibrant organization.

Hometown/where you grew up:  I grew up in the Milwaukee area and in Brantford, Ontario, where we lived for three years.  I moved to Madison in 1987, after college and law school and several years of work.

Family:  I’m married to Heidi Pankoke. We have twin daughters, Claire and Allie, who will both graduate from college in 2021.

Career:  Retired, after spending the majority of my career working for the State of Wisconsin, most recently as Secretary of the Wisconsin Department of Revenue

What is your favorite foundation event? Lunch for Libraries and Ex Libris

What is your connection with libraries, past and present?  I’ve liked reading and libraries since I was a boy.  My mother worked at her local library, and my father served on library boards. They both enjoyed hearing about the foundation’s activities.

Which library do you use the most?  Sequoya and Central

What kinds of items do you check out, and which programs do you enjoy? I mostly check out history books, biographies and travel-related books, and I enjoy author events.

What is your favorite book? All the King’s Men by Robert Penn Warren

Hobbies:  Reading, bicycling and travel (especially train travel, which included a monthlong circumnavigation of the United States on Amtrak in 2019)

What makes Madison Public Library special to you?  I enjoy walking into libraries and seeing the buzz of activity, with all types of people of all ages reading, using the computers, meeting in the conference rooms and attending events.

← Catching Up: Meet Donor Relations Manager Dayna Long Library Board to Revisit Reopening Plan on May 6 →