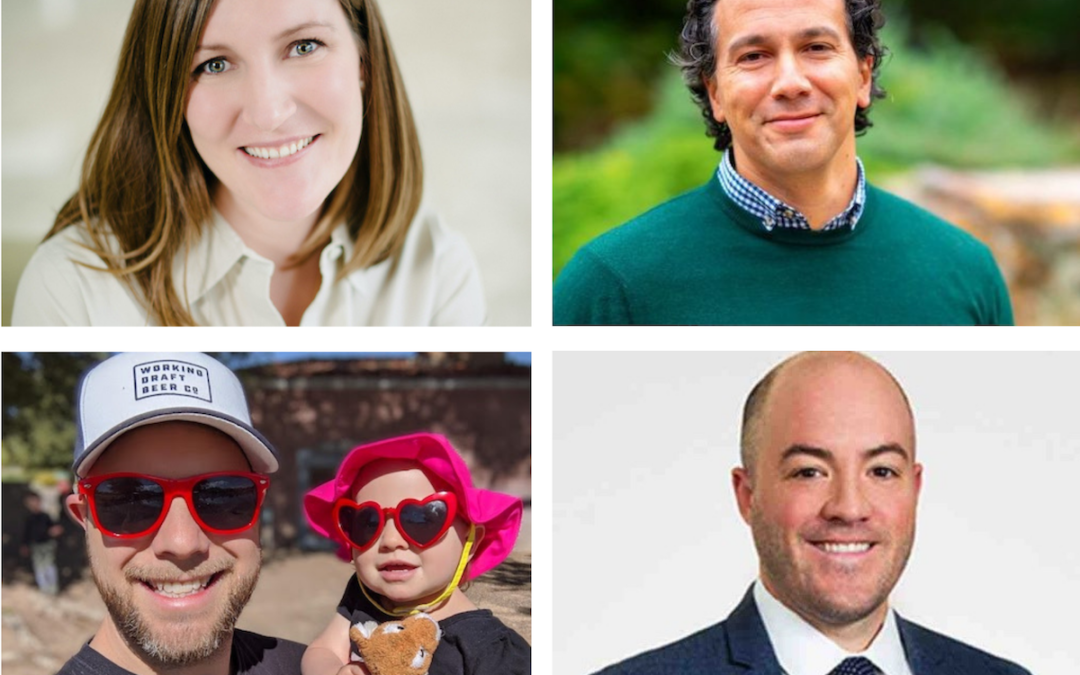 Madison Public Library Foundation’s board of directors has four new members whose terms began in October. The foundation thanks departing board members Melissa Selinger, John Icke and Gail Ambrosius for their service.

Nathan Houdek (pictured above, bottom right)
Houdek, who serves as Deputy Insurance Commissioner for the State of Wisconsin, was born in Phillips, Wis., and has mostly lived in Madison since his college days at UW-Madison. He and his wife, Sarah, are east siders. “I believe that libraries are one of the most important institutions in any community, and I’m excited to play a small part in supporting our library system in Madison,” he said.

Houdek is a Central Library user and enjoys political biographies, with two of his favorites being The Rise of Theodore Roosevelt and Master of the Senate: The Years of Lyndon Johnson.

He’s also involved with the Wisconsin chapter of the New Leaders Council and serves on its Advisory Board. “It’s exciting to see how libraries continue to evolve and provide new, innovative services,” he said. “I look forward to seeing what Madison’s libraries look like in the 21st century.”

Ryan Browne (pictured above, bottom left)
Working Draft Beer Company CEO Browne got to know foundation Executive Director Jenni Jeffress and Foundation Manager Tracy Phillippi through the foundation’s Ex Libris fall fundraiser. “Like attracts like, so I was all in when they invited me to join them with the rest of the board members, who I know will be tops,” the Sequoya Library patron said.

Browne, whose hometown is Colorado Springs, Colo., moved to Madison in 2011. He and his partner, Brittany, have two children: Casper and Dorothy. His favorite book is Next: New Poems by Lucille Clifton. “A bit of beer and books is a winning combo,” he said.

Libby Gerds (pictured above, top left)
Gerds is a heavy library user, most often requesting items through Monroe Street Library. Originally from Stillwater, Minn., she is Co-Founder of Groundwork Events and has lived in the area since attending UW-Madison in 2001.

“I love the library and have since I was a kid,” she said. “We use every part of the many services (the library) provides, like kids programming and books, digital materials, adult books, music and other collections, voting at the library, and more.”

Gerds is married to Mike Graham, and the couple has two children, Louie (7) and George (5). A self-described voracious reader, Gerds said she’s recently enjoyed Writers and Lovers by Lily King and The Dragons, the Giant, the Women by Wayetu Moore. She has also served on the board of a nonprofit Madison preschool since 2017.

You’ll find Hankey checking out items from Sequoya Library, where he can find two of his favorite titles: A Sand County Almanac by Aldo Leopold and The Beautiful Struggle by Ta-Nehisi Coates. The Senior Manager of Diversity, Equity and Inclusion at CUNA Mutual Group was born in Los Angeles, attended high school in Racine, Wis., and has lived in Madison the last six years.

“I admire the role that libraries play in our communities,” he said. “It’s so much more than just access to books, but that alone is so important for the health and equity of our communities.”

Hankey also serves on the Centro Hispano board and is Adopt Ice Coordinator at Nakoma Park.