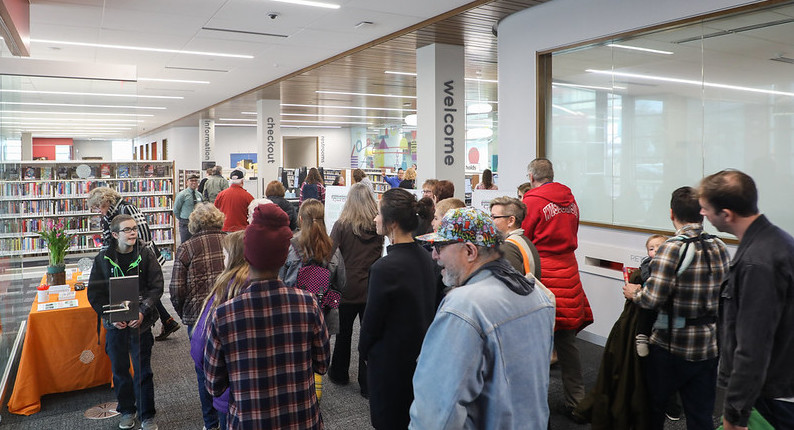 Two weeks of Pinney Library grand opening events that began with a gala on February 29 and culminated with an official ribbon-cutting ceremony on March 12 attracted more than 2,000 community members to the new space, located in the Royster Commons building on Madison’s east side.

The ribbon cutting featured remarks by Mayor Satya Rhodes-Conway, Library Director Greg Mickells, Capital Campaign for a New Pinney Library Co-Chairs Phil Plourd and Heather Clefisch, and other project leaders. Nearly 400 people came to be the first to walk through the doors of the freshly opened library.

Earlier that week, the library and Madison Public Library Foundation hosted private events for the capital campaign’s donors, project collaborators, builders and others who made the new library possible.

Love the Library: A Grand Opening Gala for Pinney Library featured local musicians, food and drinks from east side businesses, a silent auction of items donated by library supporters, and tours of the facility. More than 380 guests attended the gala, which raised more than $92,000 to complete the capital campaign and seed the Pinney Library Endowment Fund for future needs.

Unfortunately, a two-day Grand Opening Weekend that was scheduled for March 14–15 had to be canceled due to event size restrictions to prevent the spread of COVID-19.

In total, the foundation raised more than $1.62 million toward the new Pinney Library. Special thanks go to event sponsors; businesses that donated food, drinks and supplies; and capital campaign contributors. This library has been a long time in the making; once it’s safe for the libraries to reopen, we hope you’ll all be able to visit this new treasure on Cottage Grove Road!

View photos from Pinney’s public grand opening and ribbon cutting and Love the Library: A Grand Opening Gala for Pinney Library on Flickr.